Skip to content
In a letter to Jovey Carlyon from  Gilbert Rogers a Cornish forester based in India at Dehra Dun, N.W.Provinces, dated 1st July 1894 –
" My dear Carlyon,  It is so hot down here that I find it impossible to write decently.  I only came down from the hills yesterday… I am writing to tell you that I have sent you a box containing some seeds of Quercus semecarpifolia in charcoal … the acorns may have all germinated on the way as they germinate here almost as soon as they fall to the ground but I hope that some of them, if they have germinated, will reach you alive.  This species of oak covers the highest hills in Yarmsa  & grows at elevations above the spruce & mixed with the silver fir, so should do well with you.  It is very hardy grows very slowly & makes a fine tall straight stem if grown in close canopy…. "
This oak now stands proud at 25m height at Tregrehan.  Veteran trees, oak and sweet chestnut survive since the first half of the 1600's in the Park.  Tregrehan garden is a woodland garden rich in exotic plants collected by enthusiasts from the early 19th century.   This 20 acre woodland garden concentrating on species from temperate regions has been described as Cornwall's temperate rainforest.   Consequently she is an important green gene bank of known source plants 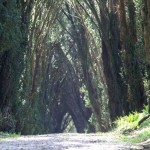 This tradition continues with Tom Hudson today, whose own collection of rare and unusual plant specimens begins to fill the void beneath Tregrehan's majestic 19th century botanical heritage
1565 Tregrehan became home to the Carlyon family
1680 the construction of Tregrehan House was begun by Thomas Carlyon, possibly the first double-pile house in Cornwall and continued by his son, also Thomas.
1734 Philip Carlyon, successful mining entrepreneur, also had horticultural interests selling laurels, elms and oaks in 1738 and also 'planting up the moor by the Whitewater with 264 trees, larch, fir, walnut, chestnut and beech'.  Philip's son died childless leaving the estate to his nephew Thomas IV.
1770 – 1854 Zenith of the families wealth and influence rapidly growing on the back of the Industrial Revolution.  This had the greatest effect on the landscvape and house and firmly established the family in society.
The landscape was contrived during the hey-day of the Picturesque period whereby landscape should be constructed as a picture with foreground, middle ground and distant views.   Thomas IV chose a Reptonian apprroach at Tregrehan.  Repton, of the picturesque school, was popular with the Cornish gentry of which Carlyon desired to be associated., which allowed for a productive, tenanted landscape. Remnants of this design are seen in the western drive.  The more revolutionary 'natural' landscapes proposed were thought to do with a more violent order associated with the revolution of France.
The barns and a dairying complex were developed with some ornamentation fashionable at the time.  Thomas's son William built the Stable block and may have started conifer planting.  His younger brother Edward Carlyon, who bought Greenway on the Banks of the Dart, inherited Tregrehan on his brother's early death in 1841.  William suffered some form of dementia in his final years and was labelled a lunatic.  Colonel Edward Carlyon moved with his family back to Tregrehan following a complete refurbishment of the house and landscape.  Architect George Wightwick redesigned the house as a stately home in 1842 in classical style with Ionic colonnade.

1844  The walled garden was remodelled to become one from two separate gardens and the extensive glasshouses stretching 128ft were erected.
1845 Edward employed noted gardenesque architect William Nesfield and together they designed the entrance court, parterre and probably the Yew walk.  Nesfields involvement in the wider landscape is uncertain.  However the design followed his intentions with major view lines running from the parterre in picturesque tradition with ill defined park boundaries, creating an illusion of infinity.  Before Edwards death he gave the land and paid for the construction of the church and steeple at St Blazey which form the Bastion view.  He created the formal drive to the beach at Crinnis and negotiated the construction of the ornamental bridge with the Cornwall Railway.
Edward also was a keen gardener.  He purchased form Veitch's for whom the Lobb brothers collected (including the monkey puzzle).  The Hooker rhododendrons were an introduction at this time, evident from Edwards account books.
1850's Thomas Tristrem Carlyon attached the ornamental piggery to the southern side of the barn which survives today as a courtyard garden
1880 – 1894 Jovey Carlyon continued with the planting of his grandfather (his father George emmigrated to New Zealand) and founded a large part of the present collection.   Over 13 nurseries supplied the garden in the 1980's, with records of species type, provenance, position and sometimes condition.
1914 Professor Sargent of the Arnold Arboretum stated  " Tregrehan is the best thing of its kind in the world"
1916 W.J. Bean visited from the Royal Botanic Gardens, Kew and published a detailed article about 'The Arboretum at Tregrehan' , noting fine examples of rhododendrons and was especially taken by the conifer collection.
1935 Carlyon family absent from the estate when Rupert Carlyon, Jovey's nephew, returned from New Zealand.  Rupert imported a large amount of material particularly the newer rhododendron hybrids
1960's Gillian Carlyon (Rupert's daughter) began a major camellia breeding programme producing many of the hybrids still in collection today.
1987 Tom Hudson (Gillian's cousin) continues planting